The Origins of the Cotteswold Naturalists’ Field Club

The early years of the nineteenth century saw the rise of numerous societies and other associations of workers in various branches of science. It is true that the Royal Society, the ‘dignified parent of all our Scientific Societies,’ expressly instituted for the promotion of natural knowledge, was formally founded in 1660, and the Linnean Society, for the study of all branches of Biology, in 1788. But in the early nineteenth century the extension of the taste for ‘Nature Studies’ and increasing specialisation of scientific workers resulted in the foundation of numerous Societies; for example, the Geological Society in 1807, the Zoological in 1826, the Geographical in 1830 and the Entomological in 1833. Such Societies, all centred in London, attracted those who were devoted to a particular branch of science but scarcely met the needs of those interested especially in the natural history of their own districts.The next step, therefore, was the formation of local societies to carry out such objects. The Berwickshire Naturalists’; Club was one of the first of these, Volume 1 of its Proceedings having been published as early as 1834 and it was on the pattern of the Berwickshire Club that the Cotteswold Club was formed, the first idea of the formation of the Cotteswold Club being put forward by Sir Thomas Tancred, and its foundation meeting honoured by the presence of Mr. P.T. Selby, one of the original members of the Berwickshire Naturalists’ Club.

The Foundation of the Club

The Minutes of the first meeting of the Club state:
1846, July 7 th , Tuesday. The first meeting of the Club took place this day at the Black Horse Inn, Birdlip, where breakfast was ready at 9 a.m. On that occasion only seven gentlemen were able to be present. ‘After discussing an ample breakfast, for which the keen air of the Cotswolds had prepared a favourable reception, the members present adjourned to a summer-house in the garden of the Inn, commanding a splendid and varied view of the Vale and City of Gloucester, the town of Cheltenham, May Hill and the Malvern Hills. Such was the appropriate birthplace of the Cotswolds Naturalists’ Club, of which it was then agreed that twenty-five gentlemen (all known to those present), should be its first members.’

It was also agreed that ‘the object of the Club shall be to investigate the Natural History, Antiquities and Agriculture of the Cotswold District and its neighbourhood’. It was arranged that the next meeting of the Club should be held at Coleford in the Forest of Dean with breakfast on the road at Little Dean. Into the Field ‘These preliminaries having been disposed of, the members present proceeded to descend thro’ Lady Cromie’s beechwoods [Witcombe Park] ……. In these woods the Botanists of the party observed the Chlora perfoliat [yellow-wort], Atropa Belladonna [deadly nightshade], Dipsacus sylvestris [wild teasel], Epipactis latifolia [broad-leaved helleborine] and a small fungus allied to the Truffle. …… Hence the Club pursued their way to the celebrated remains of a Roman Villa, where they found specimens of the Edible Snail (Pomatia) supposed to have been descendants of those introduced by the Roman inhabitants.’ ‘From Cooper’s Hill we returned thro’ Cranham Woods and Tod’s Cottages, a sort of architectural encampment, and however slightly laden with the rarer spoils of the various kingdoms of Nature, no member of the Club failed to bring back with him to the Hostel a healthy appetite and a feeling of satisfaction derived from the interchange of interesting discussions and facts which such a walk could not fail to suggest and elicit.’
So the Foundation Meeting dealt with Natural History, Archaeology, Landscape and Geologybefore the Members separated, delighted with their first day. 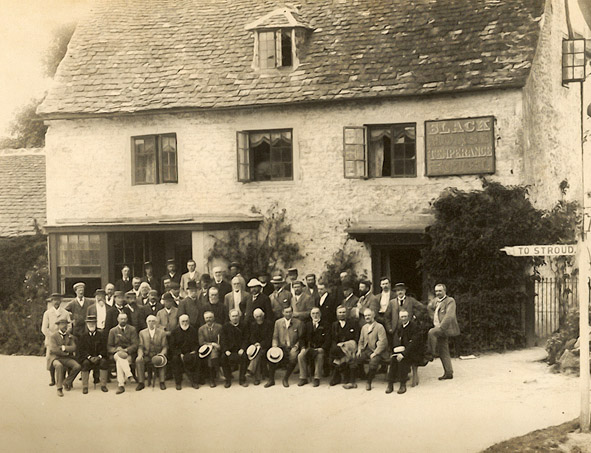 The Cotteswold Naturalists’ Field Club is arguably the oldest club of its kind in England. It has witnessed major advances in natural history, geology, agriculture, rural economy, archaeology and local history. However, we like to think that little has changed in the intervening years in relation to the Club’s interests and sense of fellowship, other than to add that membership is open to all. We should also record that collecting specimens on our field meetings is much more limited, many species and sites now being protected by law.